dns.toys is a DNS server that takes creative liberties with the DNS protocol to offer handy utilities and services that are easily accessible via the command line.

Over the last few weeks I built my own DNS client. Mostly because I thought dig was kinda clunky. Partly because I wanted to learn more about DNS. So here’s how I built it, and how you can build your own too. It’s a great weekend project, and I learned a lot from finishing it.

DNS is simple enough that you can grok it quickly, but still complex enough that Adam learned a ton along the way: reading RFCs, network sockets, Bitvec, and more.

Julia Evans has a cool new web tool for experimenting with DNS. She wrote up why she created it and some of the tech behind the tool on her announcement post:

Mess With DNS gives you a real subdomain, and it’s running a real DNS server (the address is mess-with-dns1.wizardzines.com). The interesting thing about DNS is that it’s a global system with many different computers interacting, and so I wanted people to be able to actually see that system in action.

You can think of Julia Evans’ new dnspeep tool as similar to tcpdump but specifically for watching your machine’s DNS queries.

One thing I like about this tool is that it gives me a sense for what programs on my computer are using the Internet! For example, I found out that something on my computer is making requests to ping.manjaro.org from time to time for some reason, probably to check I’m connected to the internet.

A friend of mine actually discovered using this tool that he had some corporate monitoring software installed on his computer from an old job that he’d forgotten to uninstall, so you might even find something you want to remove.

It also probably comes in handy when debugging those pesky “could it be DNS?” issues, but this might be a limitation on that front:

One thing this program doesn’t do is tell you which process made the DNS query, there’s a tool called dnssnoop I found that does that. It uses eBPF and it looks cool but I haven’t tried it.

Over 500 organizations and 18,000 individuals have signed a letter urging the Internet Society to stop the private equity takeover of the Public Interest Registry (PIR), the organization that manages the .ORG top-level domain. It’s rare that EFF, Greenpeace, Consumer Reports, Oxfam, the YMCA of the USA, and Human Rights Watch all speak out about a single issue, but the sale of .ORG affects every corner of the NGO sector.

Sounds like ICAAN can stop the sale and has already taken some action by requesting additional information for review.

This story comes from Ars Technica, not The Onion:

In June 2017, Adams drove Hopkins to the domain-name owner’s house “and provided Hopkins with a demand note, which contained instructions for transferring the domain to Adams’ GoDaddy account,” the DOJ said. The heist didn’t go as planned, and both the domain-name owner and Hopkins ended up suffering gunshot wounds.

Can you imagine transferring a domain name at gun point?

Lin Clark strikes again with her ridiculously well done code cartoons. This time, she’s taking on the task of explaining why Mozilla is championing DNS over HTTPS.

(Curious about Lin, her teaching efforts, and her work at Mozilla? GOTO 294.) 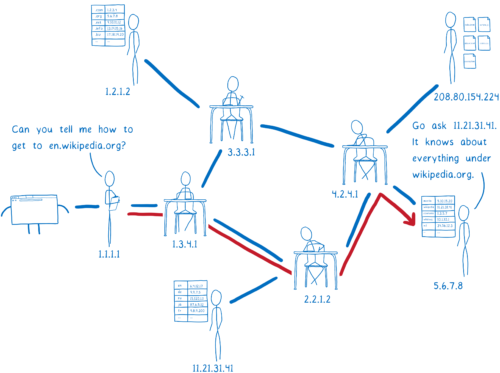 Yesterday’s coverage of CloudFlare’s new DNS service (1.1.1.1) was met with a few cries of “SLOWER FOR ME”!

Is it faster or slower in your neck of the woods? You can find out easily by running the linked script. CloudFlare wins easily from where I’m sitting (see below). Off to go change my settings!