Ignition offers you a beautiful, customizable error page. It also allows you to share your errors to Flare publicly. If configured with a valid Flare API key, it will send errors to a project in your Flare account. 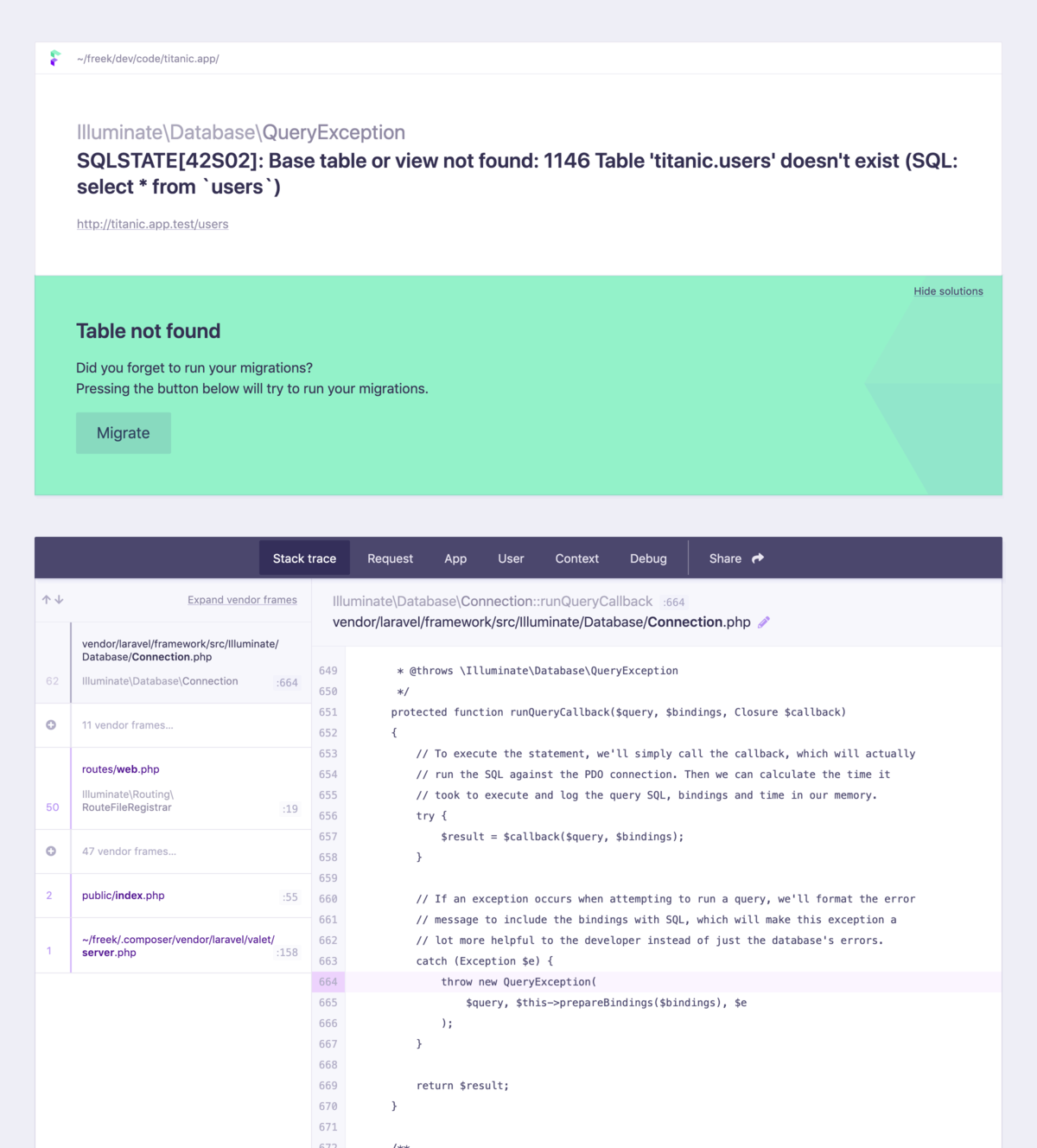 By giving Pipe Dream a minimum of input in form of a sketch/entity list it will predict your application schema and feed it into a set of pipes. These pipes will generate all the files needed to get started really quick.

See Pipe Dream in action on this 2-minute intro video.

Drop-in Pusher replacement, SSL support, Laravel Echo support and a debug dashboard are just some of its features.

This looks really well done. The Laravel community is en fuego as of late. 🔥

Half my kingdom for a Telescope port to Rails and Phoenix/Plug. 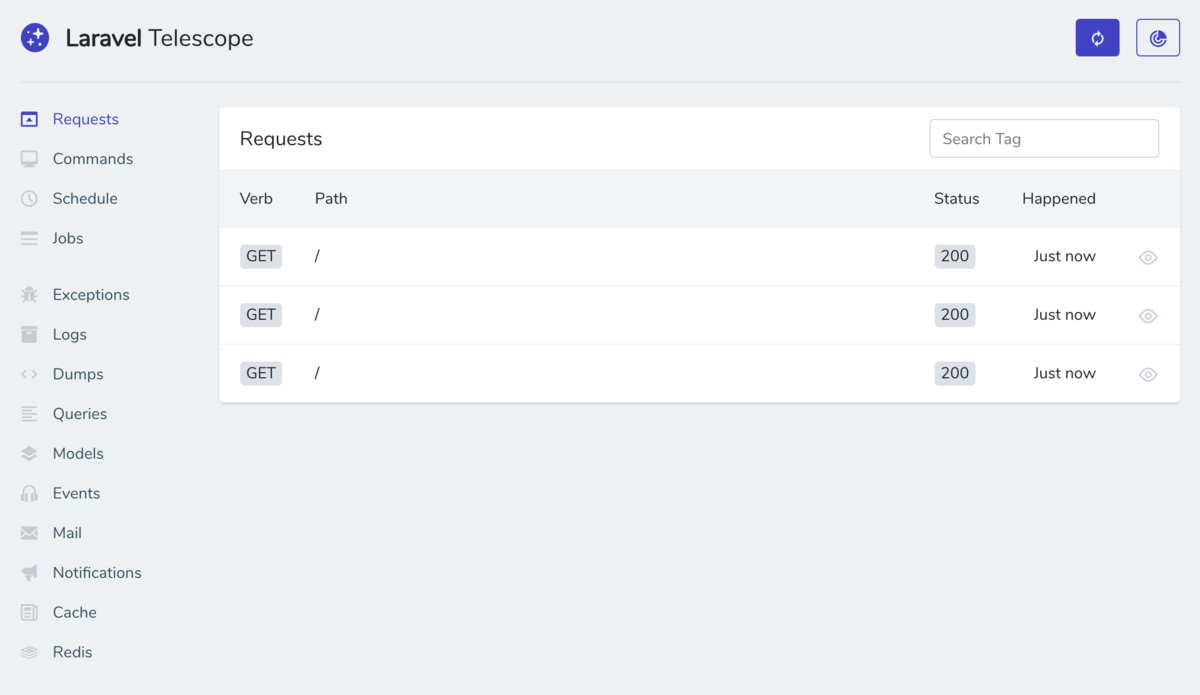 RoadRunner is an open source (MIT licensed), high-performance PHP application server, load balancer and process manager. It supports running as a service with the ability to extend its functionality on a per-project basis.

RoadRunner is written in Go, and can be used to replace the class Nginx+FPM setup, boasting “much greater performance”. I’d love to see some benchmarks. Better yet, I’d love to see someone use this in production for a bit and write up their experience.

This looks like a super useful package for anyone running/operating a Laravel app. 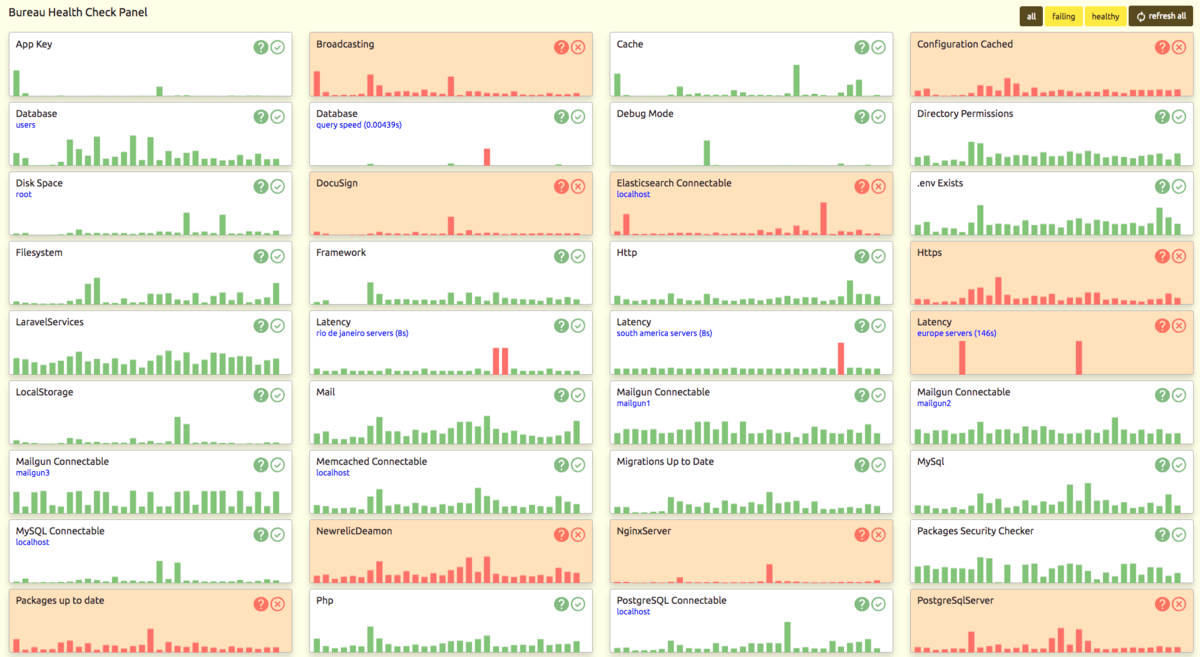 PuPHPeteer supports the entire Puppeteer API. The README has a few examples where Pupeteer’s documentation has been adapted to PHP syntax.

Have a bunch of web projects on your local development computer, nestled in your ~/Sites (or other-OS equivalent)? Just need a simple way to enumerate them as links so you don’t have to keep track of them as they get created/removed? OK with PHP? Localhost Index has your back.

To be clear, this is not a CMS. It’s a framework to build your own CMS for your Laravel projects. 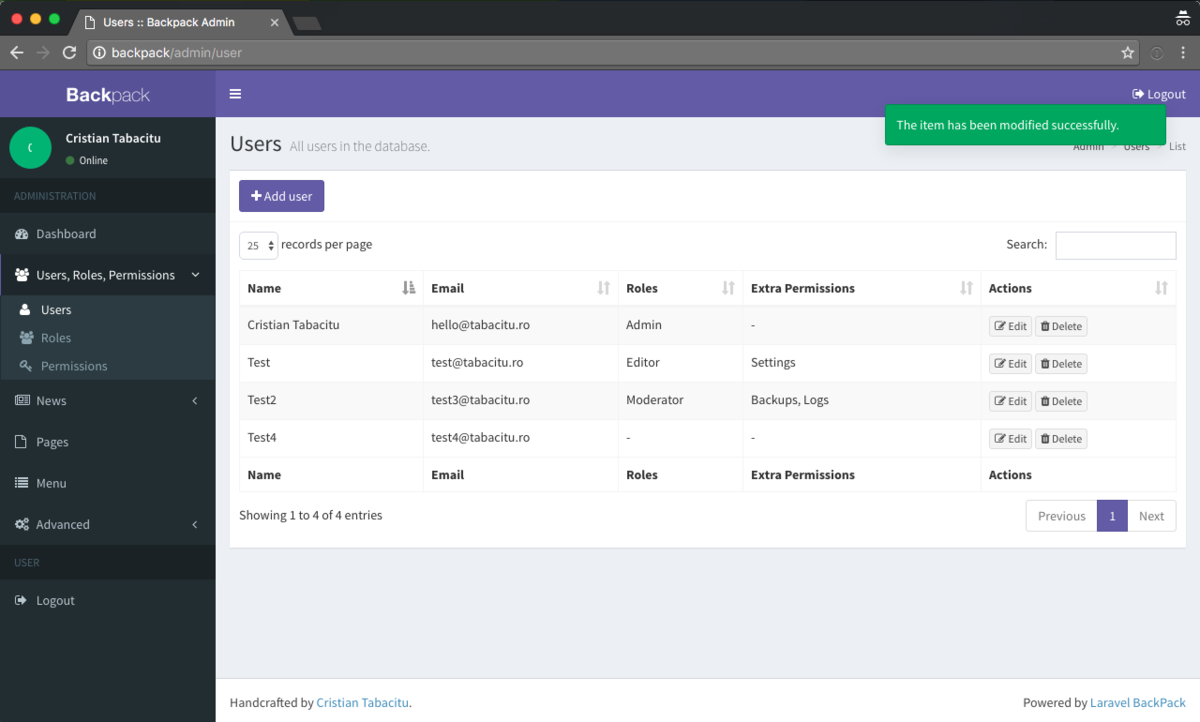 Want an easy to set up status page system for your web presence that’s also easy on the eyes?

Brilliant ideas can be painfully obvious in retrospect. They’ll leave you thinking, “Why didn’t we I think of that before?!” Docopt is that for parsing CLI arguments.

You just built an API, and want to make sure everyone can use it. Building libraries in every language isn’t only going to be hard, its going to take a lot of time. Time you don’t have. This is where Alpaca can help.

You define your API according to the format, alpaca builds the API libraries along with their documentation. All you have to do is publishing them to their respective package managers.

Right now it can generate API clients in PHP, Python, Ruby, and JavaScript. You can see examples of the generated client libraries here. I can’t speak to the quality of all the generated language bindings, but I took a cursory look at the Python lib and it looks good. Looks like Alpaca could save us all a lot of time.

Want to add personalization such as recommendations or content discovery to your application? PredictionIO has your back.

You can download and install the server yourself or use their cloud infrastructure. Clients already exist for Java, PHP, Python, and Ruby, and I assume more are on the way.

Check out all of their open source goods right here.

Chris Corbyn was frustrated with PHP’s lack of a good REPL, so he took matters into his own hands and created Boris. I can relate to Chris’s experience. Back when I used to write WordPress plugins I got so frustrated by the lack of a Rails-like interactive console that I created one for WordPress.

Boris is cooler than my little plugin because it works outside of WordPress and runs directly in your terminal. Check it out in action:

You can install Boris via Packagist or use it directly by cloning the repo:

This and much more information about the REPL is available in the README. Boris is MIT licensed and hosted on GitHub.

If you find yourself jumping back and forth between Chrome’s Dev Tools and a terminal displaying your server side request logs, Craig Campbell’s Chrome Logger might be just the thing you need!

It’s a Chrome extension which lets you see your server side logs right in the browser. There are currently libraries for:

Is your server side language/environment of choice not on that list? Don’t worry, Chrome Logger uses an open and published protocol so you can easily write client libraries of your own!

See the project’s home page for more info or check under the hood if you’re curious about how it all works.

Higher level libraries for dealing with HTTP are cropping up in almost every language. The latest is Requests, a PHP library from Ryan McCue. Inspired by Kenneth’s Python library of the same name, Requests aims to provide a better HTTP API than cURL:

I’ve written about my thoughts on what makes a good API wrapper and libraries like these that provide a more idiomatic experience are just great.

Imagine is a nice looking image manipulation library for PHP 5.3+ that supports GD2, ImageMagick, and GraphicsMagick in a clean, chainable API from Bulat Shakirzyanov:

Check out the extremely detailed project docs and examples for advanced usage.

I don’t always use WordPress, but when I do, I prefer Thematic (and compass-wordpress). Thematic is a WordPress theme framework from Ian Stewart that provides an abstracted API, letting you focus on your site instead of the lower-level minutia of WordPress.

Options are declared in a PHP array, as in this example:

Devin has a nice blog post with more info including how to use these values in your theme, along with an introductory screencast.

Are you a PHP developer who feels like you get no respect? That’s exactly what Alexandre Gomes Gaigalas and Carlos A. Ferrari are offering with their GitHub organization.

Validation is billed as “the most awesome validation engine ever created for PHP.” While that might be the epitome of hyperbole, it is indeed nifty. Validation includes more than 30 chainable validators supporting composite validation of nested, grouped, and related rules.

Let’s look at a simple example:

We did mention chaning, right?

Did you know that the always-reassuring Is it Christmas? website has been open sourced? Eric Mill recently made the code available to the public, along with the official Android and iPhone app repos on GitHub.

Make sure to submit your pull requests in time for next year!

[Source on GitHub]
[Is it Christmas?]

Another Friday, time to spotlight some GitHub folks you should follow.

The author of nokogiri and mechanize, Aaron also empowers you to do fuzzy texticle searches.

The man who helps you manage your package using npm.

The author of the canonical PHP library for the Twitter API and fun Chrome extensions, a cool dude who is master of his domain — name.

James is a technologist, executive & entrepreneur, working in the arena of the mobile web, all while living around the world. This year he happens to be living on an island off Belize.

He also wrote modernizr-server - a way to bring Modernizr browser data to your server scripting environment. PHP is currently supported, and James intends to offer other server-side environments in the future, but that’s going to be based on demand!

We’ve covered Modernizr being used in other projects before. Modernizr is a great way to find out about your user’s browser capabilities. However, you can only access its API on the browser itself, which means you can’t easily benefit from knowing about browser capabilities in your server logic.

Progressive enhancement, media queries and body classes are fine for tweaking sites and their appearance. But for structural changes to sites and pages, sometimes it’s much simpler to just emit the right markup from the server in the first place.

The modernizr-server library is a way to bring Modernizr browser data to your server scripting environment. For example, in PHP:

The first time the user accesses a page which includes the modernizr-server.php library, the library sends the Modernizr script to the client, with a small script added to the end. Modernizr runs as usual and populates the feature test results.

The small suffix script then serializes the results into a concise cookie, which is set on the client using Javascript. It then refreshes the page immediately.

This second time the PHP script is executed, the library takes the cookie and instantiates the server-side $modernizr object with its contents. If possible, this is placed in the PHP $_SESSION so that it can be quickly accessed in subsequent requests.

While either of the cookie or session remain active, no further execution of the Modernizr script will take place. If they both expire, the next request to a page containing modernizr-server.php will cause the browser to rerun the Modernizr tests again.

Check out the codes

It’s Wednesday again, time for us to serve up another quick list of projects to watch on GitHub. These are projects you might have missed or should could keep an eye on.

David Dollar makes automatically scaling your Heroku dynos a snap with this gem. Simply add the gem to your Gemfile

Now your app will scale up with traffic and down as traffic wanes.

Warning! This email address will self destruct. Perfect for media site content walls, contests, or auction transactions, Tempalias is powered by Node.js and lets you create email addresses with a built-in expiration using http://tempalias.com/ or hosted on own your own site.

Jtv-apns is a gem for accessing the Apple Push Notification Service that allows both sending notifications and reading from apple’s feedback service. This gem is based heavily on the work of James Pozdena.

Tweetnest is a PHP app to archive, browse, and search your tweets. A nice Git wrapper for Vim:

View any blob, tree, commit, or tag in the repository with :Gedit (and :Gsplit, :Gvsplit, :Gtabedit, …). Edit a file in the index and write to it to stage the changes. Use :Gdiff to bring up the staged version of the file side by side with the working tree version and use Vim’s diff handling capabilities to stage a subset of the file’s changes.