There’s a new stack in town. PETAL. It destructures to Phoenix, Elixir, Tailwind, Alpine and LiveView. So what is it? Well, it helps you build web applications. Let me tell you about it…

This is a great rundown by José Valim of what the Elixir community has been up to recently and what’s coming in 2021. Exciting times! I’m particularly excited by the upcoming JIT compiler for the Erlang VM and what it might do to improve compilation times.

As the editor of the Elixir Radar newsletter, I read lots of articles related to Elixir every single week. Along the year I read probably more than 700 articles, so I could curate the best ones and send them to Elixir Radar’s subscribers.

In this article, I share the 11 most popular articles on Elixir Radar in 2020. Those are the ones that had the biggest engagement from Elixir Radar subscribers in each month of 2020, in terms of CTOR (click-to-open rate).

This blog post shows how to combine a few tools available with Elixir, OTP, and related ecosystem in order to understand and improve the memory footprint of an HTTP call.

I’ve got a fever and the only prescription is more |>s.

Steven Fuchs loves his Sonos, but…

While it is the radio of the future, our most common usage is as the radio of the past. We tend to tune it to one station and leave it there. By far, our most common interactions with the system are changing the volume and pausing/playing the music, often creating scrambles to find a phone to turn down the volume in order to answer a different phone. What we needed was an analog interface to this digital system that was always at arms reach.

Hackers gonna hack. Steven reached for Elixir and scratched his own itch with this very cool little hardware project. Here’s a demo video of it in action.

A Native Implemented Function is implemented in C (or Rust when using Rustler) and can be called from Elixir or Erlang just like any other function. It’s the simplest and fastest way to run native code from Erlang but it does come with a caveat: a crash in a NIF can bring down the whole BEAM. This makes Rust a safer option than C for implementing NIFs as its type system and ownership model guarantee memory and thread-safety.

The Nerves Keyboard project is a small group of enthusiasts using the IoT tooling from the Nerves project to build a mechanical keyboard that can be programmed and customized with Elixir. The work happens in the open and is currently moving towards the hardware stage. This is a quick getting-started tutorial.

I thought it’d be cool to get mix test and mix format running on pushes to the changelog.com repo, so I gave GitHub Actions the old college try. After (not too much) futzing around on my own, I figured I’d have more success by getting an expert to help out. Good call be me! 😆

In this ~1 hour jam session, we go from zero to a successful Actions workflow. I learned a lot along the way, and you might too by joining us on the journey. Thanks, Jonathan!

A bit of writing on what potential we leave on the table when we use tools that trade technical merit for other factors. And why Elixir just might have higher potential for web services than many other popular languages and runtimes.

This comes from the just-announced Supabase, which is “an open source alternative to Firebase”. Oh, and if you’re thinking NOTIFY is good enough… maybe it is, maybe it isn’t.

Wondering why your Phoenix application is recompiling dozens or hundreds of files every time you make a small change? Cross-module compilation dependencies are often to blame.

Phoenix v1.5 has been released with LiveView integration. This release makes it easier than ever to build interactive, real-time applications. We put together a quick screencast to show just how much you can accomplish in 15 minutes with LiveView

After José’s announcement yesterday I just had to get my hands a little dirty and kick the tires.

José and the Phoenix team just announced this cool new dashboard for monitoring real-time performance of your production Phoenix systems. I’ll be setting this up and kicking the tires on changelog.com ASAP. 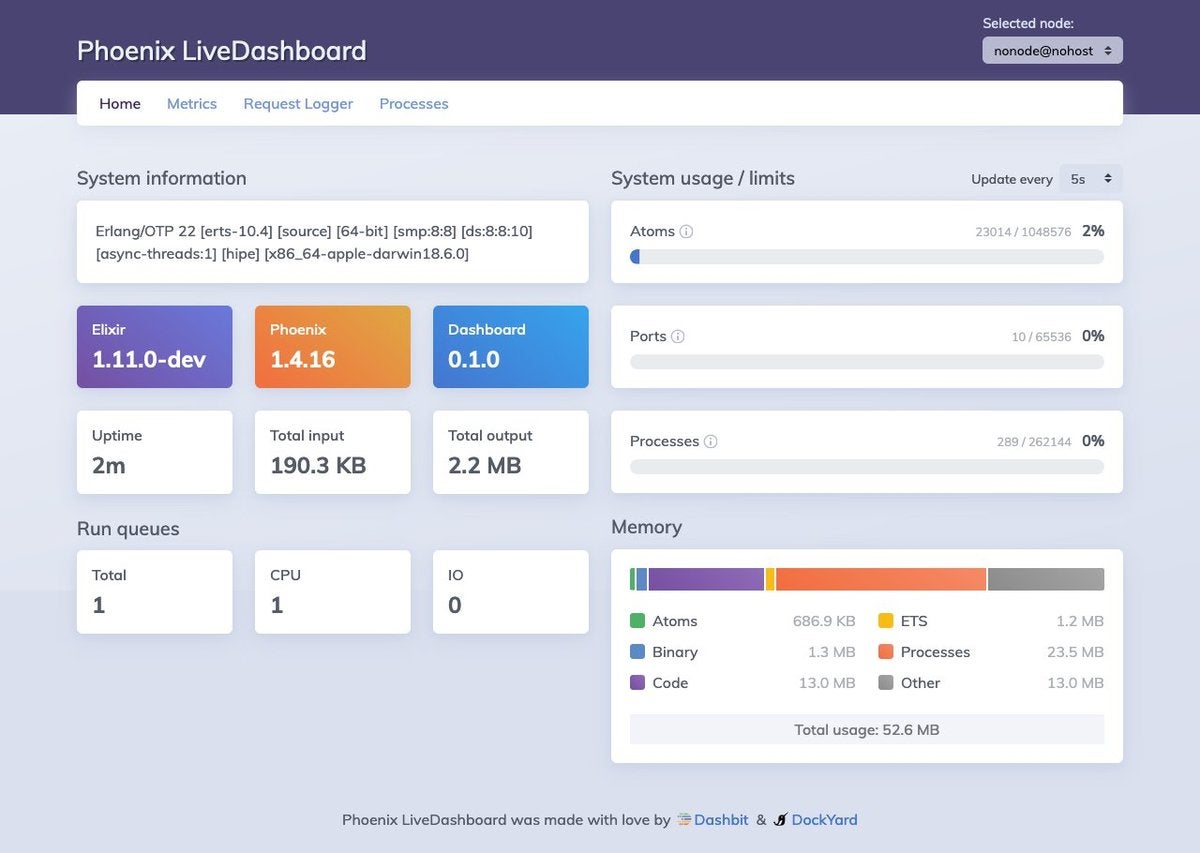 Jam session! I sat down (metaphorically) with Phoenix’s new LiveView feature to see if I can integrate it into our admin to provide a Google Docs-esque experience for podcast co-hosts.

This is my first long-form video where I work toward a goal with no clue how to actually get there. Please let me know if you dig this style in general and/or if you have any advice on the particulars.

I have thought about launching “Devise for Phoenix” probably hundreds of times. I had long conversations with Chris McCord (creator of Phoenix) and co-workers about this. Helping Phoenix users get past the burden of setting up authentication can be a great boost to adoption. At the same time, I never found a proper way to approach the problem.

You can probably guess what’s coming next…

About 2 months ago I decided to handwrite a simple and secure authentication solution on top of a Phoenix application.

Cool stuff. Click through to learn the details of what he came up with (and what’s happening next).

MixAudit provides a mix deps.audit task to scan Mix dependencies for security vulnerabilities. It draw its inspiration from tools like npm audit and bundler-audit.

Vulns sourced from the community-maintained elixir-security-advisories. 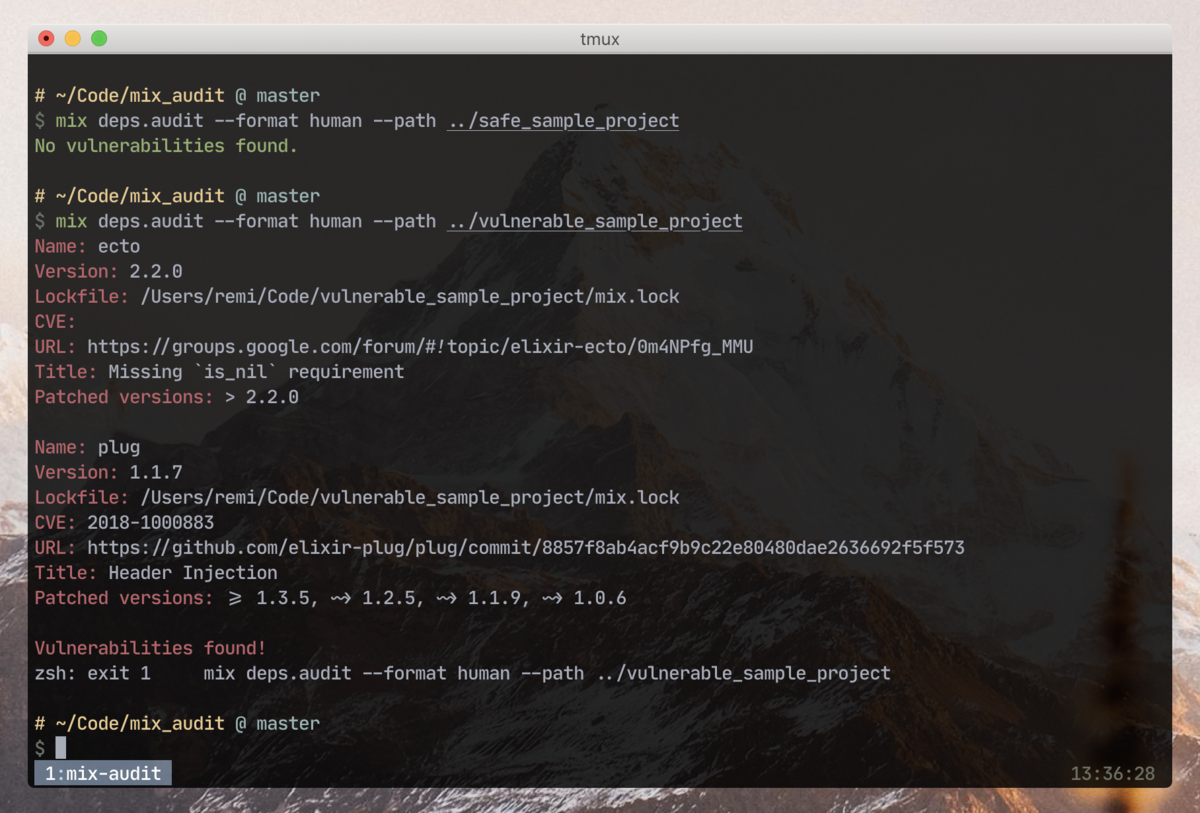 Johanna Larsson built the super cool Hex Diff tool for the Elixir community. What does it do?

In short, you input any Hex package name and a version range, and it will generate a highlighted git diff for you, right there in your browser. Not only that, but you can also share the link to the diff, and even highlight a specific row.

In this post on her blog, Johanna goes into the details of how she built the project, how it works, and issues she ran into along the way.

The Lumen Project is an alternative implementation of the Erlang VM, more known as the BEAM. It is designed to work in WebAssembly with the specific goal of bringing Elixir and Erlang to the browser with minimal overhead, tightly compiled rather than porting a full VM. Can it replace JS for some developers?

An excellent article, highly recommended. Lars hangs out in our community chat and suggested we do an episode with the Lumen team. Talks are underway, so stay tuned for that.

This is a great resource to have at your disposal while reading the official Elixir docs.

While working throughout the guide - there were multiple positions where the ideolog seemed overwhelming resulting to various logical bugs because of shorthand syntax mismatch. There is no repository available to cross-check your results either to fix your bugs. Hence - I thought it would be nice to have this as a reference guide to how you need to implement your project.

I need this in my life.

What I’m most excited for with Phoenix LiveView isn’t necessarily the cool technology that it really is, but more the freedom that it gives me to quickly implement nice-to-have features that would otherwise be too much work to bother with.

I’m having a lot of fun with Svelte right now, but it’s probably time for me to turn my attention to LiveView. Where there’s enough smoke, there’s usually 🔥…

Conventional template languages like EEx use a form of interpolation to embed a programming language into a markup language, which can result in some ugly code that can be difficult to write and debug.

There are some good ideas here, for sure. (Click through for code samples.)

My concern with this (and with pretty much all non-HTML style template languages) is cognitive overhead for folks who’d rather be writing HTML. That being said, if I were creating a web app from scratch all by my lonesome, I’d 💯% give Temple a go.

The Discord team bumped up against some limitations of the BEAM (Erlang’s virtual machine) when dealing with rather large data structures:

This meant that when someone joined a server — internally referred to as guilds — with a Member List of 100,000 members, we would have to build a new list with 100,001 members in it.

You’ll want to click through and read all of the data structures they tried to fix this problem. It’s some seriously solid engineering and I love how they continued to measure and push themselves further. Finally, they reached for Rust thanks to BEAM’s NIF feature and really scaled up the speed.

… releases was the last planned feature for Elixir. We don’t have any major user-facing feature in the works nor planned. I know for certain some will consider this fact the most excing part of this announcement!

This doesn’t mean the language will stop moving forward, but you’ll have to read the full announcement to get the full picture. The Releases feature looks shiny, for sure. Congrats to all involved for yet another awesome milestone!