Plaintext storage, git-backed, Markdown formatting, and all in a single script. 👌 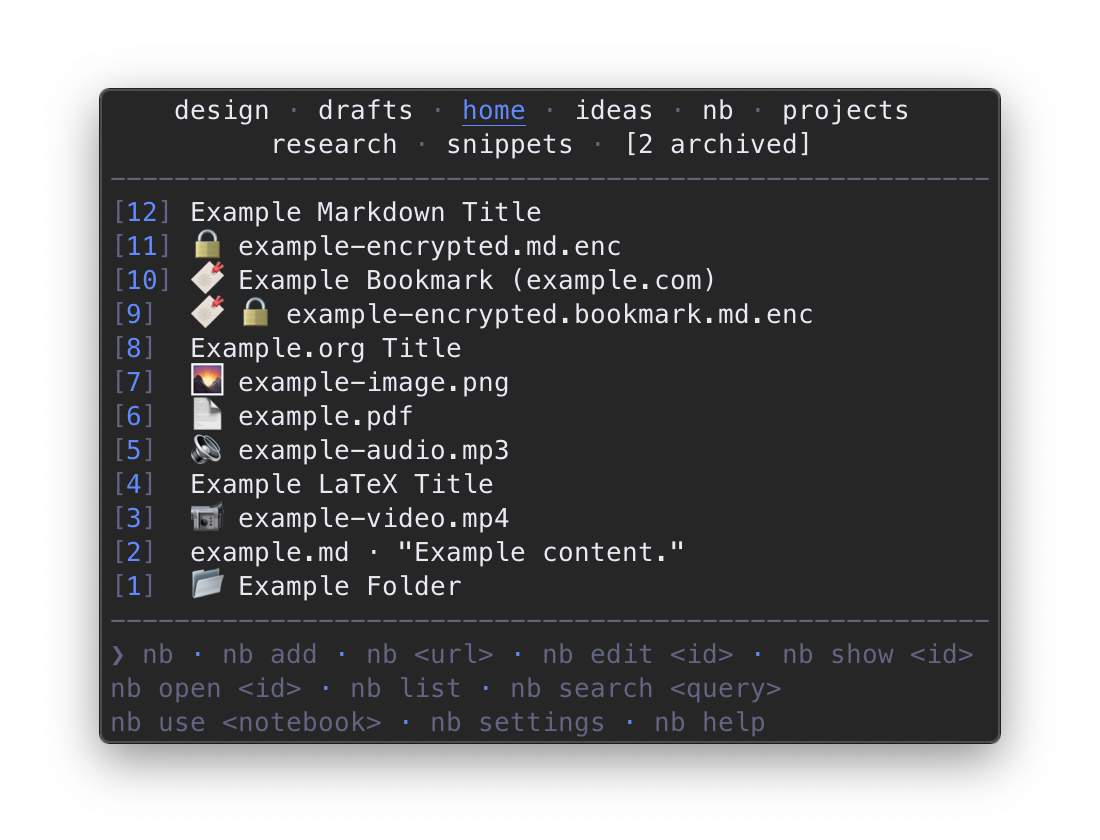 We software developers are already pretty good at googling things, but “dorking” (a new term to me, and a perfect one at that) covers more ground than merely programmer problems.

It’s the use of search engines to find very specific data, such as webpages, emails, coupons, secrets, etc.

Go-Diagrams lets you turn this code: 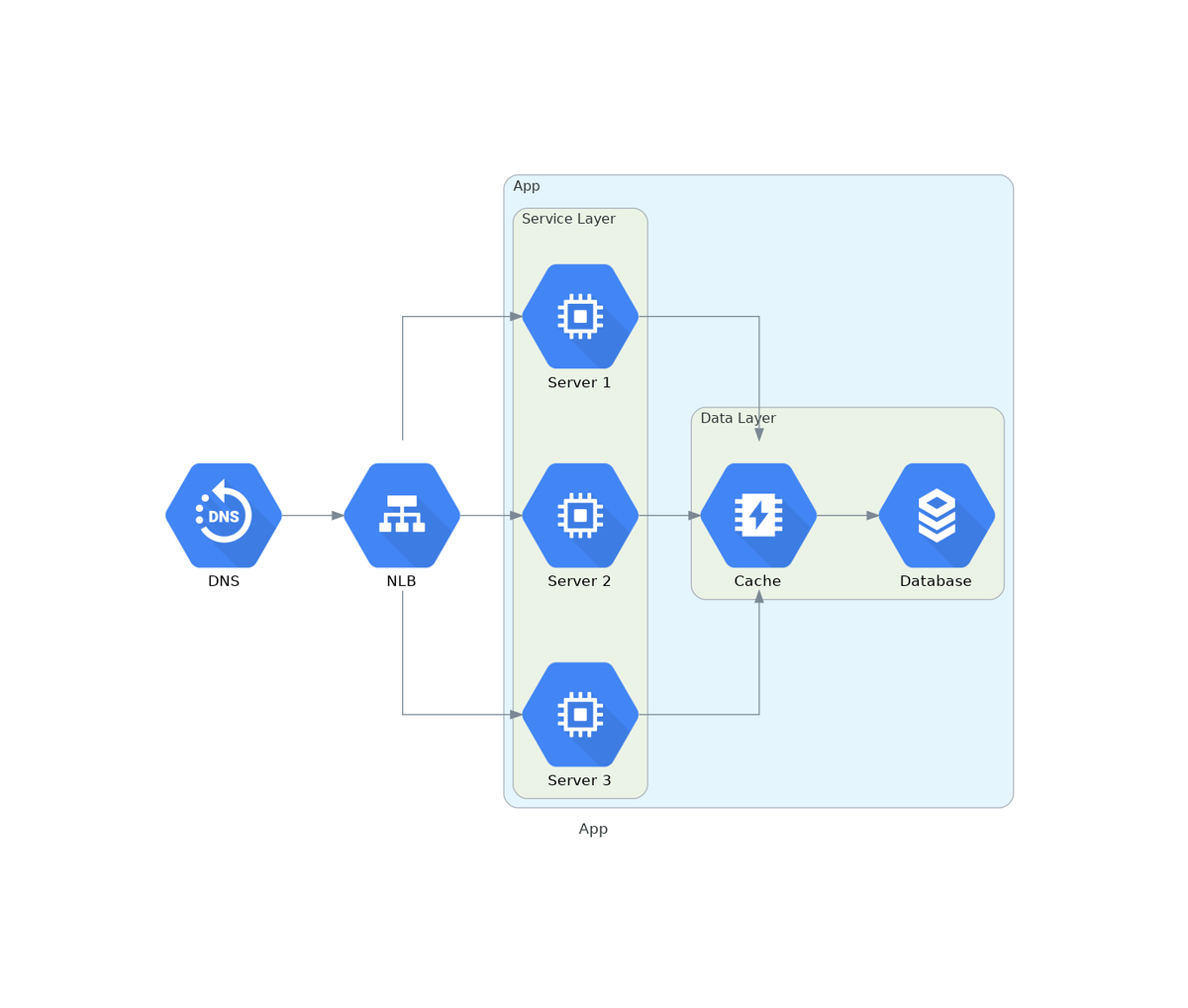 If you’re new to DevTools, this is a must-read. If you’re an old pro, you might still learn a thing or two. Like did you know they have multi-cursor support?! DevTools are slowly turning into a full-in development environment…

Sometimes you just need a throwaway email and you can’t be bothered to leave the terminal, I get it.

According to FBM, there are three things we need to do something:

The key is that we need to have all three at the same time in order to act. Since our problem is procrastination, we’ll focus on how we fail at each one of these.

Organize your daily tasks at one place while making time tracking a lot less annoying. Super Productivity is a ToDo List / Time Tracker / Personal Jira Task Manager for Linux, MacOS and Windows aimed at reducing the time you spend with repetitive tasks and to provide you with a place to collect all the information you need to do your job.

This is a bit too much engineering for me, but perhaps you’ll like it. On an upcoming episode of Brain Science we’ll be talking about Indistractable by Nir Eyal. One of the larger topics of being distracted is procrastination. In the book, Nir says procrastination “originates from a need to escape psychological discomfort,” and in this post they say…

Procrastination is driven by our desire to avoid difficult emotions…

Pretty close, right? Read this if you want a nice primer on the concept of procrastination, what’s inducing it, and how to overcome it. Else, for the non-tldr, just read Indistractable so you can follow along with us during that upcoming episode.

I’ll save you a click if you’re only curious what those two things are:

You and your business will benefit greatly if you can address these issues. You and everyone on your team will enjoy yourselves more and accomplish more. The data echoes what our common sense tells us: We need to carve out more time for ourselves if we want to remain focused and effective at work. These five daily practices will help.

How you think has everything to do with the quality of your thinking. Great writing Jose 👏

If being a good software engineer means being a good thinker, then becoming a better one should mean improving the way we think… right? Well, little shame in saying that it’s taken me more than a decade of coding to get this. To finally focus my attention on improving the way I think instead of learning yet another library, framework or programming language.

At a certain point, the things that got in the way of my growth had nothing to do with problem solving and everything to do with what was actually happening in my mind when I should have been engaging with a problem.

Members of the Opensource.com team stress-test five open source video-conferencing apps so you don’t have to.

The apps they tried are: Jitsi, Signal, P2p.chat, Nextcloud Talk, and BigBlueButton.

Jitsi looks pretty good. Anyone using it? What’s your experience?

The name derives from the Standup meetings since its initial purpose was to cover my need for keeping my Standup notes in a convenient way.

Then you can pull them back out by date, date-range, and/or category with:

Notes are all saved as plaintext (markdown) so throw the entire directory in your synced-cloud-folder solution of choice and you have instant notes sync across all your devices.

Mickey Muldoon shares 20 rules to being a 1x developer 😂

I am a 1x developer. I do enough to get by respectably.

I’ve been using GitHub since the service’s inception and I still learned a thing from this excellent list of 10 tips & tricks from GitHubber Lee Reily. The details trick alone is worth the price of admission.

This post is part of a sample chapter from Essential Tools and Practices for the Aspiring Software Developer — a self-published in-progress book by Balthazar Rouberol and Etienne Brodu.

I estimate that I spend around 50% of my day working in my text editor and my terminal. Any way I can get more productive in these environments has a direct and measurable impact on my daily productivity as a whole.

On a personal level, I probably use some of these up to 30 times a day, sometimes even without thinking about it, and it gives me a real sense of ownership of my tool.

This is an interesting take on email that I haven’t seen before. Process your email like you process your user stories. 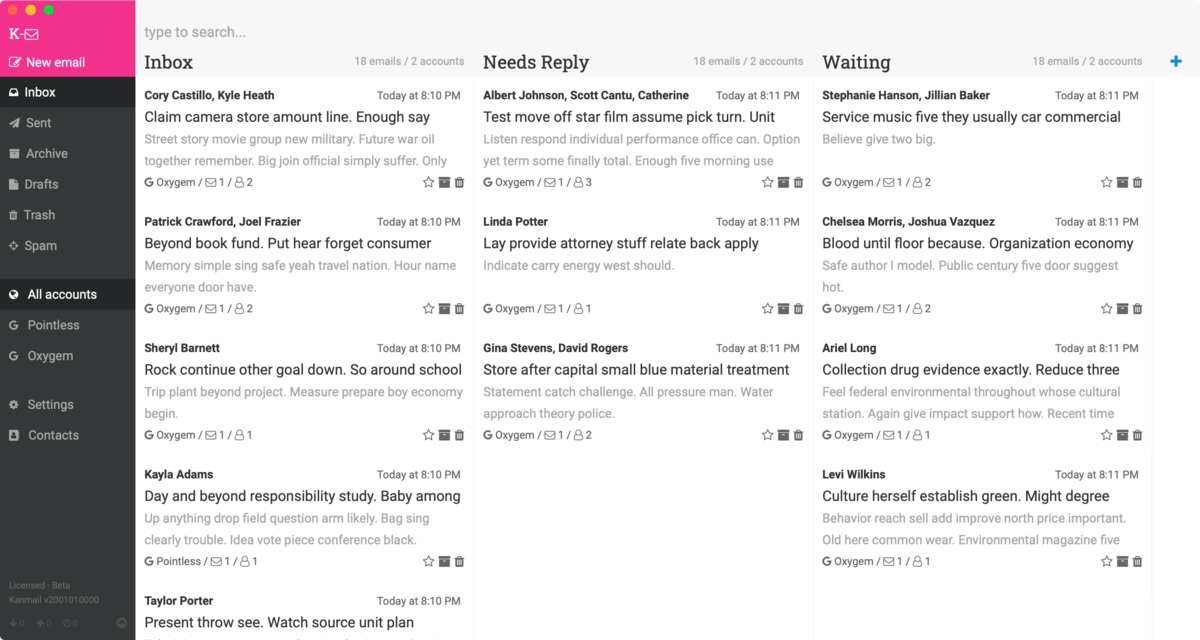 If you use (and abuse) Gmail’s filters in order to wrangle your inbox, this tool might help you keep your sanity as you maintain them over time.

This utility helps you generate and maintain Gmail filters in a declarative way. It has a Jsonnet configuration file that aims to be simpler to write and maintain than using the Gmail web interface, to categorize, label, archive and manage your inbox automatically.

You know that there’s a chasm between your skill level and that of the mythical “senior software developer”.

If you build a list of topics you encounter on your job that, if learned to a deep enough level, would put you on the same level as a senior developer, you’ll end up even more demoralized than before compiling that list.

No need to assemble this list yourself! I’ve done it for you.

I’ve heard many people recommend Deep Work over the years. Add this one to the list.

(I like this style of writing where you imagine a hypothetical new developer –knowing full well they real thing is out there– and tell them things you wish you’d known when starting your career as a dev.)

Justin Searls shares some advice on working from home that he’s acquired over 9 years of running a remote company. I like how he breaks it up into advice for humans (everyone), employees, and managers.

I mentioned this post in the resources segment of today’s JS Party recording all about WFH. That conversation hits feeds a week from tomorrow.

I’m literally drinking my coffee as I write this. ☕️ 🤓

Like many of our readers, I love coffee. It’s a crucial part of my boot-up process, and it would be very difficult to start my day without at least one cup. Also, like many of our readers, I play a role here at Changelog that not only requires me to have great problem-solving abilities, but also to be creative. Thankfully, according to this study from Darya Zabelina (Assistant Professor at University of Arkansas), I can “keep drinking my coffee.”

For the study, 80 volunteers were randomly given either a 200mg caffeine pill, equivalent to one strong cup of coffee, or a placebo. They were then tested on standard measures of convergent and divergent thinking, working memory and mood. In addition to the results on creativity, caffeine did not significantly affect working memory, but test subjects who took it did report feeling less sad.

“The 200mg enhanced problem solving significantly, but had no effect on creative thinking,” said Zabelina. “It also didn’t make it worse, so keep drinking your coffee; it won’t interfere with these abilities.”

On convergent vs divergent thinking…

In the paper, Zabelina differentiates “convergent” from “divergent” thinking. The former is defined as seeking a specific solution to a problem, for example, the “correct” answer. The latter is characterized by idea generation where a large set of apt, novel or interesting responses would be suitable.

Simon Eskildsen (Director of Product Engineering at Shopify) shares his elaborate system to read, retain, and apply the lessons in hundreds of books.

We explore his elaborate system for remembering what he reads using Readwise and Anki, how he built his own custom Zettelkasten in Markdown, his process for automating his language learning, and his project to cook a dish from every country in the world.

This is not my normal beat, but I thought it might help those of us (most of us, right?) fighting fatigue. Knowing why, after all, is half the battle.

To understand more about the different types of fatigue, I spoke to Dr. Jaclyn Tolentino, a primary care physician at Parsley Health, as well as Dr. Richard Firshein, a general practitioner and insomnia specialist who runs the Firshein Center in Manhattan. Here are the most common culprits of exhaustion, and how to treat them.

I would imagine many of us fall victim to more than one of these, but the ones we likely share are #3 (stress tired) and #5 (bad sleep hygiene). Maybe a Brain Science episode on this subject is in order?

What you see is what you paste. No WYSIWIG, no formatting pasted from the web, and no features you don’t need or want.

GitHub sync is still in-progress, but this repo is worth a ⭐️ in the meantime. 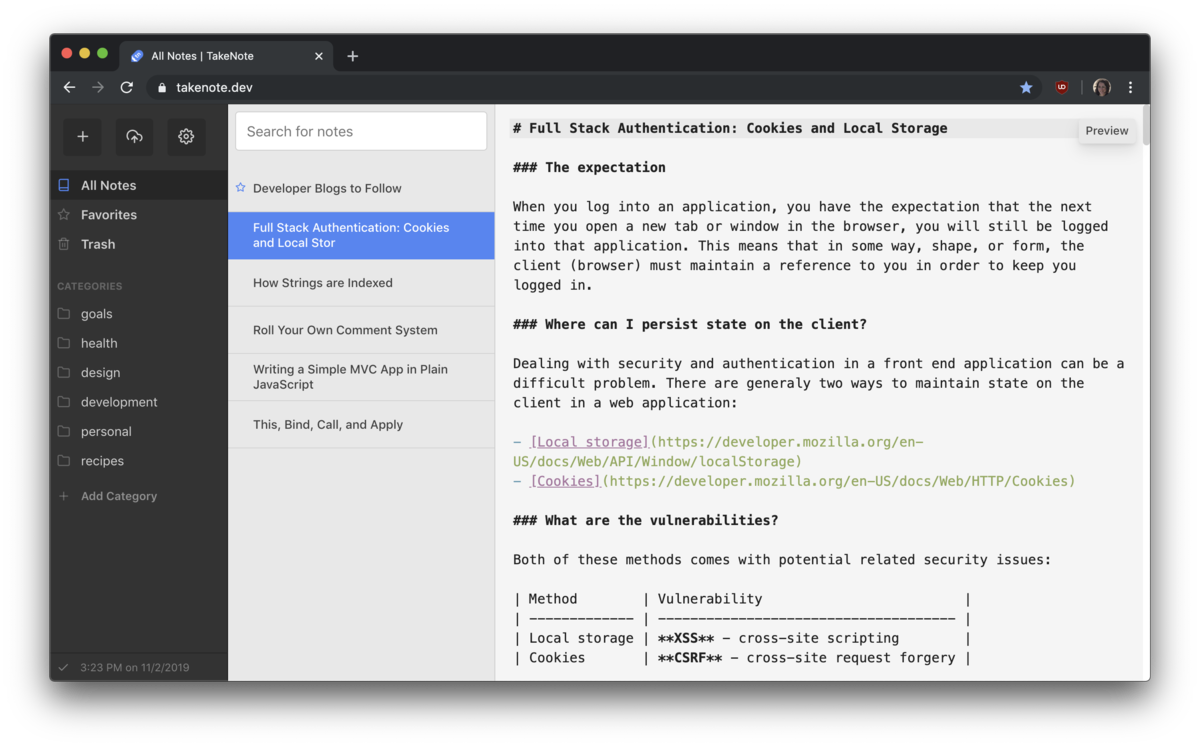 A fully private memory-boosting extension to eliminate time spent bookmarking, retracing steps to recall an old webpage, or copy-pasting notes into scattered documents. Its name and functionalities are heavily inspired by Vannevar Bush’s vision of a Memex.

“Memex” is thought by some to be a portmanteau of “memory” and “index”. Makes sense to me. 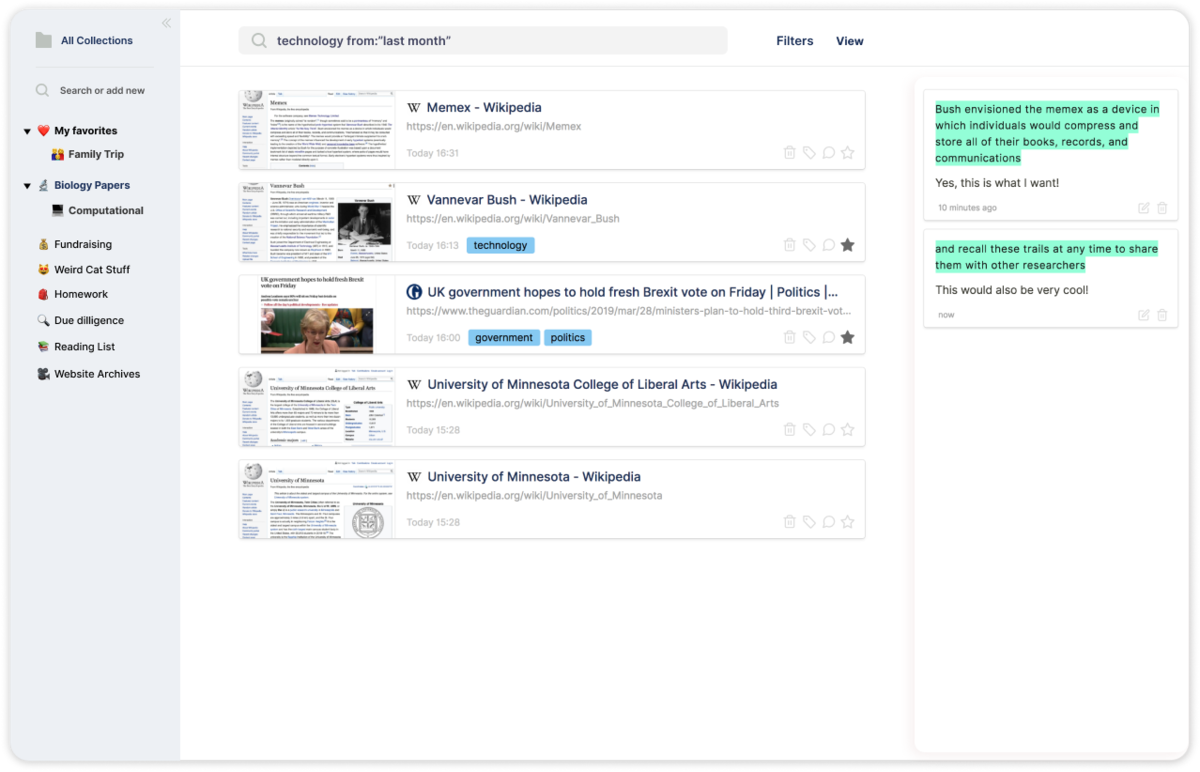