In this post, I will show you some advanced usage patterns for working with Playwright in order to take a screenshot of a specific element and modify the contents of the image, either before taking the screenshot or after, using image preprocessing tools.

That is the question. Whether ’tis nobler in the mind to suffer the slings and arrows of outrageous test coverage, or to take arms against a sea of bugs…

Debbie O’Brien –Senior Program Manager at Microsoft– joins Amal & Nick for a deep-dive on Playwright, an automation library for cross-browser end-to-end testing. Along the way, we learn why Microsoft decided to fork Puppeteer, Playwright’s unique value proposition, cool features like auto-waiting & the trace viewer, how it compares to Cypress & a lot more.

For web automation/testing, Selenium has been the de facto “standard” since forever. It’s simple to get started with and supports almost every programming language.
My problem with it has been: It’s good enough, but nothing more. It doesn’t work that well with modern, Javascript framework heavy sites (Angular, React etc). I’m not saying it doesn’t work– just not too well.

I practice “weak TDD”, which just means “writing tests before code, in short feedback cycles”. This is sometimes derogatively referred to as “test-first”. Strong TDD follows a much stricter “red-green-refactor” cycle…

Turns out I also practice “weak TDD” most of the time, but I didn’t know there was a (derogatory) term for it. In this post, Hillel lays out why he does weak TDD and why he doesn’t do strong TDD. Oh, and stick around to the end to learn why he thinks TDD hasn’t conquered the world…

While most teams I talk to would love to be able to run A/B tests to accurately assess the performance impact of certain changes, the problem is pretty much every popular A/B testing tool on the market has such a negative impact on load performance that they’re essentially unusable for this purpose.

If you’re just trying to determine which of two marketing headlines converts better, then perhaps this performance difference isn’t so bad. But if you’re wanting to run an A/B test to determine whether inlining your CSS in the <head> of your pages will improve your FCP, well, those popular A/B testing tools are just not going to cut it.

He goes on to describe his process for running performant A/B tests on his static site using Cloudflare workers to swap in/out his experiments.

Christopher Meiklejohn has been working for two years on developing an automated resilience testing tool called Filibuster and was able to test it out at DoorDash during his research internship:

The results were pretty good! Maybe we won’t need chaos monkeys as tools like Filibuster advance?

In short, Filibuster can identify many of the technical resilience issues that exist in applications earlier, at the time of development, without testing in production as required in more traditional chaos engineering techniques.

Victor Engmark thinks we should start test names with “should” for a handful of reasons, here’s a few:

I don’t disagree, but I like to take it a step further: Let the “should” be implied by the rest of the test name.

Instead of: should replace children when updating instance

Instead of: should apply discount when total cost exceeds 100 dollars

Most of Victor’s reasons for using “should” still apply with this format, but it’s less verbose and more accurately describes the software working as expected when the tests pass.

Testing microservice architecture locally is difficult. At Nylas, we’ve created a local development environment using Minikube and Tilt. In this article, I walk you through how we do it.

Good for them (and us)! But what does that mean in practice?

Over the next few months, we’ll be completing the OpenJS Foundation’s incubation program checklist, including transferring the Jest domain, repo, website, and other assets to OpenJS. We’ll also be updating the code of conduct and contributor license agreement.

Additionally, as part of this move, we will be publishing a project charter and creating new governance policies that will document the process for gaining commit access, as well as our leadership selection process.

Pia Wiedermayer, Lead QA at Zühlke, is talking with Gerhard today about software quality. If the name sounds familiar, check out episode 28. Thank you Romano for the introduction 👋🏻

Do you remember the last time that you used an app, whether it was in the browser or on your mobile, and everything just worked? What about that intuitive feel, snappiness and you achieving the task that you intended to without feeling that you are fighting tech? Experiences like those take a lot of effort across multiple disciplines. They are designed, built and maintained over long periods of time. It all starts with people like Pia that really care about quality. It’s so much more than just automated testing…

I love articles like this one because I was ready to disagree with it going in, but it was so well-reasoned and articulate that I ended up agreeing with most everything the author proposes.

This hit my radar a few times in the past year – this week, and then most recently a few months back when we had Richard Hipp on The Changelog (again) – but, I didn’t post it to the newsfeed.

Here’s what’s interesting about the SQLite test suite – it’s their secret sauce…the sustaining enablement of building a support business around SQLite. Here’s a direct quote from Richard Hipp in that episode.

Originally we thought we were gonna sell this and make money from it, and that’s how we were gonna support ongoing development. That didn’t really play out, nobody ever bought it. It does sort of become our business value, our intellectual property. I mean, you can take the SQLite code and fork it and start your own thing…but you don’t have the full test suite. You’ve got a lot of tests, but not all of them. So we’ve got a little bit of advantage over you there.

Click here to play that episode from this quote.

Jacob Kaplan-Moss, who has been writing a lot about good interview questions and how to hire well:

Work sample tests are an exercise, a simulation, a small slice of real day-to-day work that we ask candidates to perform. They’re practical, hands-on, and very close or even identical to actual tasks the person would perform if hired. They’re also small, constrained, and simplified enough to be fair to include in a job selection process.

To give you a more concrete idea of what I’m talking about, here are several examples of work sample tests I’ve used…

And just in case you think he’s prescribing whiteboarding…

However, work sample tests are also a minefield: the space is littered with silly practices like whiteboarding, FizzBuzz, Leetcode, and “reverse a linked list”-style bullshit. The point of this series is to separate these silly practices from the good ones and to give you a framework and several examples to use in your hiring rounds.

Property-based tests give us more confidence in our code. They’re great at catching edge-cases we may not have thought of otherwise. But this confidence comes at a cost. Property tests take more effort to write. They force you to think hard about what the code is doing, and what its expected behaviour should be. It’s hard work. And on top of that, running 100+ tests is always going to take longer than running 3–5 example-based tests. This cost is real, and it raises the question:

How do we keep ourselves from over-specifying or writing unnecessary tests?

Property-based testing helps us write better tests, with less code, and greater coverage. This leads to more confidence in our code, and fewer bugs in our applications. But, as always, there’s a price. Property tests take more effort to write, and they take longer to run. But they’re worth it.

Recently I discovered additional reasons to write tests for my code! Besides obvious and well-known ones described in books and many blog posts, I realized that the process of writing tests has also psychological effects for me. These effects are especially helpful in cases of hotfixes that need to be deployed as soon as possible.

This week Gerhard is joined by Justin Searls, Test Double co-founder and CTO. Also a 🐞 magnet. They talk about how to deal with the pressure of shipping faster, why you should optimize for smoothness not speed, and why focusing on consistency is key. Understanding the real why behind what you do is also important. There’s a lot more to it, as its a nuanced and complex discussion, and well worth your time.

Expect a decade of learnings compressed into one hour, as well as disagreements on some ops and infrastructure topics — all good fun. In the show notes, you will find Gerhard’s favorite conference talks Justin gave a few years back.

The top 1% of companies spend thousands of hours building their own A/B testing platforms in-house. The other 99% are left paying for expensive 3rd party SaaS tools or hacking together unmaintained open source libraries.

Growth Book gives you the flexibility and power of a fully-featured in-house A/B testing platform without needing to build it yourself. 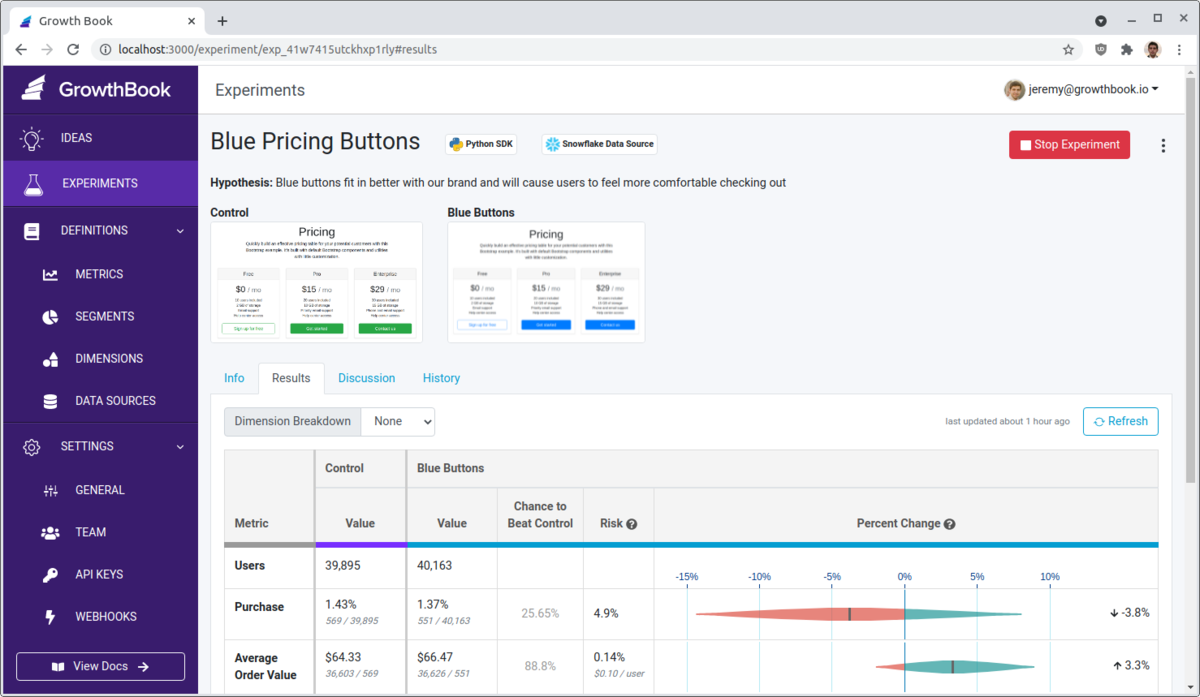 On 24th April 2021, Angular announced the deprecation of their E2E testing tool protractor. It was unclear if there will be a successor or if Angular delegates this to its users. In this article, I will provide a short overview over the differences between the various E2E frameworks, and argue why you should use Cypress.

I’ve heard nothing but high praise of Cypress and thoroughly enjoyed our conversation with Gleb Bahmutov when he joined us on JS Party.

By adding visual elements to your tests, you can gain more options to add meaningful ways in maintaining a high level of quality for your app. Colby Fayock explains how.

This article pairs nicely with what Angie Jones had to say about visual testing on Our recent JS Party episode.

Fuzzing is coming to the standard library. We speak to Katie Hockman and Jay Conrod who were part of the team responsible for designing and implementing it. We dig into the details, hear some best practices, where fuzzing can help your code, and learn more about how it works.